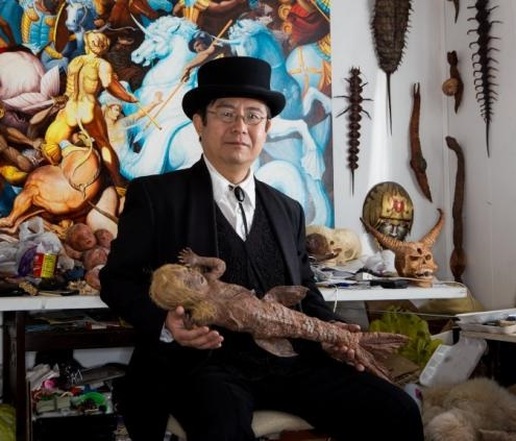 Artist, educator, and author Takeshi Yamada (山田 武司) was born and raised at a traditional and respectable house of samurai in Osaka, Japan in 1960. He began oil painting at the age of 10 (fifth grade), and decided to become an artist at 16. As an international exchange student of Osaka Art University, he moved to the United States in 1983 and studied art at the California College of Arts and Crafts in Oakland, CA and Maryland Institute College of Art in Baltimore, MD in 1983-85, and completed his Bachelor of Fine Art degree in 1985. Yamada obtained his Master of Fine Art Degree at the University of Michigan, School of Art in Ann Arbor, MI in 1987.

As a painter, Yamada’s ‘Visual Anthropology" artworks reflect unique, distinctive and often quickly disappearing American culture around him. In 1987, Yamada moved to Chicago, and by 1990, Yamada successfully fused Eastern and Western visual culture and variety of cross-cultural mythology in urban allegories, and he became a major figure of the River North art scene. His painting graced the cover of the book, "Chicago art Scene". His paintings of New Orleans Mardi Gras granted him solo exhibitions at Louisiana State Museum and Lauren Rogers Museum of Art, in addition to be the part of the major group show at Meguroku Museum of Art in Tokyo. By 1990, his artworks were widely exhibited internationally. In 2000, Yamada moved to New York City.

As a sculptor, Yamada's "Rogue Taxidermy" artworks reflect his passion for oddities, curiosities, freaks, and wonders whether they were created by nature or human (gaffs). Takeshi Yamada developed a passion for collecting natural specimens at a young age and by kindergarten had transformed his bedroom into the “Cabinet of Curiosities.” By age eight, Yamada had created dozens of taxidermy “monsters” including stag-horned beetles with butterfly wings and two-headed lizards. Yamada is a resident of New York’s fabled Coney Island, where he operates the Freak Baby Museum as well as the Museum of World Wonders, which features a 32-foot giant sea serpent, a six-foot mummified mermaid, and an eight-legged 6-foot spider dog. He also created dozens of sideshow gaffs and giant picture banners for major nation-wide traveling sideshow companies. Known for wearing vintage tuxedos, French berets and top hats, Yamada is most often seen with his most prized accessory, Seara – a creation of half rabbit, half duck with a seal’s tail - a furry ode to Coney Island whose original Dutch name translates to “Rabbit Island.”

Yamada won numerous prestigious awards and honors i.e., “International Man of the Year”, “Outstanding Artists and Designers of the 20th Century”, “2000 Outstanding Intellectuals of the 21st Century”, “International Educator of the Year”, “One Thousand Great Americans”, “Outstanding People of the 20th Century”, “21st Century Award for Achievement”, “Who’s Who in America” and “Who’s Who in The World”. The Mayors of New Orleans, Louisiana and Gary, Indiana awarded him the “Key to the City”. Yamada’s artworks are collections of many museums and universities/colleges i.e., Louisiana State Museum, New Orleans Museum of Art, University of Michigan Museum of Art, Chicago Athenaeum Museum, Eastern Oregon University, Montana State University and Ohio State University.


This is the official fine art website of the Japanese-American artist, rogue taxidermist, educator, and author, Takeshi Yamada (山田 武司). Images contained on this website may not be used or reproduced in any manner without the explicit permission of the artist.  For information on obtaining the rights to use images on this site, contact Takeshi Yamada at takeshiyamadaart@gmail.com with “image licensing” as the subject line.
© Copyright, Takeshi Yamada, All Rights Reserved.